Orest Kyrylchuk Software Engineer
5+ years of experience.
Originally from Lviv, Ukraine, but currently live in Seattle, WA.
Blog posts are my own.

In this part, we would create a CI/CD process using AWS tools. There are a few AWS services for that:

To remind you about Waitlist application we have multiple lambda functions:

In total 7 lambda functions that ideally should be built, deployed and tested together.

We start with creating a pipeline for our application. Open AWS console then go to CodePipeline tool and press on Create pipeline button. There are multiple steps to do, and I will try to provide the most important details.

A few options are available as a source: GitHub, S3, CodeCommit, ECR. We could also add multiple sources to our pipeline.

A separate window is opened to create AWS CodeBuild project for our pipeline build stage. There are multiple sections with a few properties each that we should specify.

For the Environment image we have 2 options:

As we’re using Serverless Framework to build an application and Golang for the lambda function we need docker container with Go tools and Node.js which has npm to install the serverless framework.

Unfortunately, there is no image like this, so we should create a custom one and upload it to Amazon ECR. The easiest way to create custom image is to combine existing dockerfiles from both Golang and Node.js images in aws-codebuild-docker-images repository on Github. After we push over image to ECR we should set a few permissions for CodeBuild to be able to access our image. Set of permissions is specified in user guide for ECR sample in documentation - Step 3.

We have 2 options here:

I would suggest to write it in the editor first to make sure it works and after commit to the repository.

We have next buildspec.yml for our project:

After we press Create project in CodeBuild we are redirected back to our pipeline creation process. Skip deploy part as we’re using the serverless framework for the build process and it deploys our lambda functions. 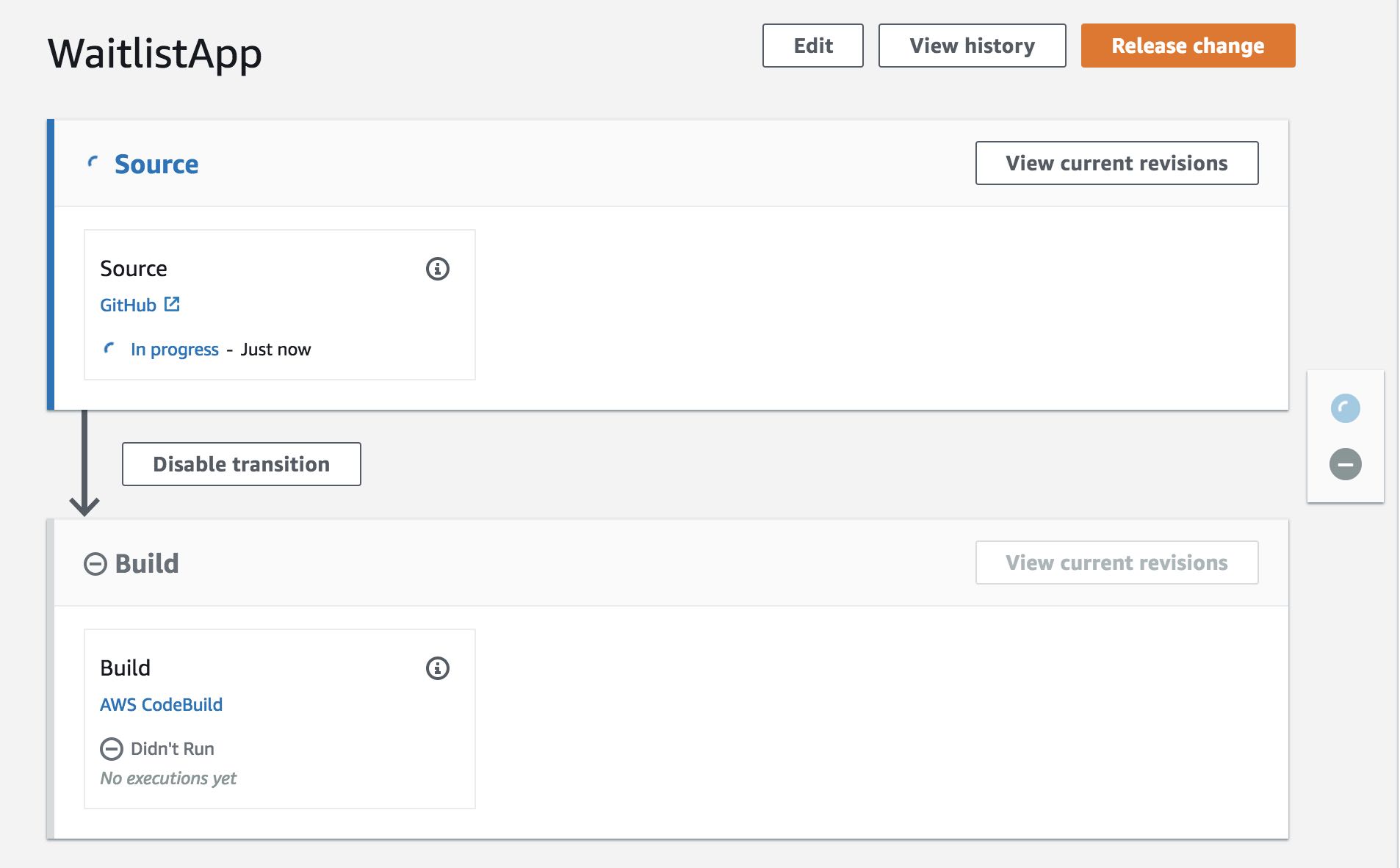 We can see configured Source and Build parts for Auth lambdas.

If we press on AWS CodeBuild from the pipeline we would see CodeBuild project details page. There we have Build History with details for each build like Status, Project, Duration etc. If we press on one of Build runs we would see details about it like Build status, Build configuration and Logs. Also, we could see logs in real time when the build is being ran.

I’m not going to provide configuration details for CRUD and Notification lambda functions as it similar to this one, but finally, our pipeline would look like: 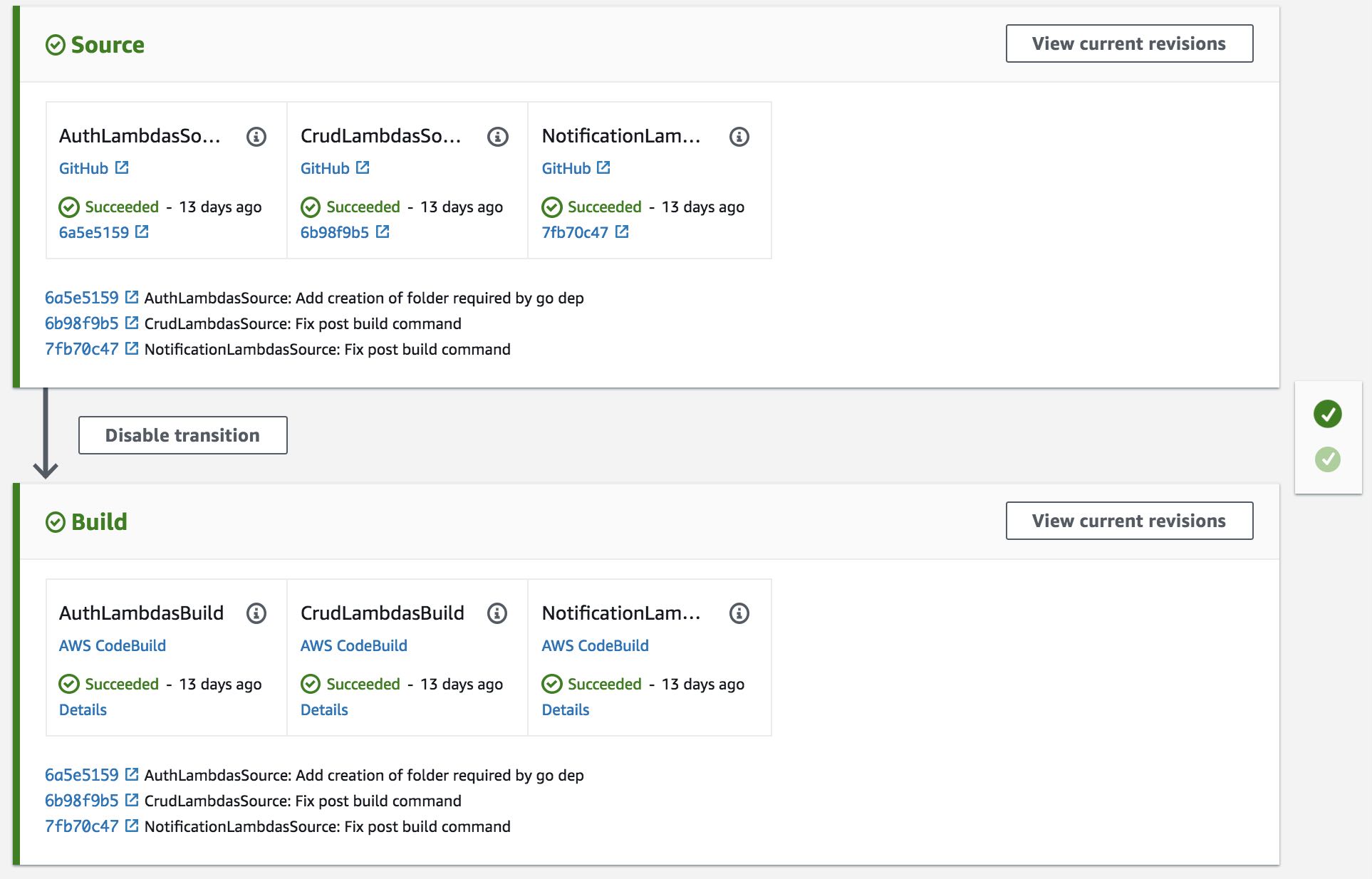 We created a simple pipeline for our WatilistApp which deploys everything in a single account. In a real use-case scenario, we would probably want to deploy to multiple stages/accounts. There a few blog posts and documentation articles that could help us with this:

Also, there is a possibility to define pipeline in JSON format which makes move to other accounts/regions very simple. Using Git repository we can control deploy to different stages with Git branches and have separate pipeline per account. For example, dev account pipeline has dev branch as a source and as final step commits changes to gamma branch with executing AWS lambda, after a pipeline from gamma account runs and as final step commits changes to prod branch.